We believe that, as an enterprise made up of numerous stakeholders, the INTAGE Group has an important responsibility not only to improve business results but also to ensure the soundness, fairness and transparency of management.
Our corporate philosophy, "THE INTAGE GROUP WAY," is the cornerstone of our management. To act consistent with that philosophy, the INTAGE Group's "Ethical Charter" has been established as a set of guidelines that all of the Group's executives and employees must follow in conducting business activities.
Based on this charter, the Group has formulated the INTAGE Group "Employee Code of Conduct," which defines the basic attitude and behavior expected of employees. The Code of Conduct is instilled in the Group's executives and employees to ensure that they carry out sound business activities in compliance with laws and regulations. In addition, the Group's internal control system is managed in accordance with its "Basic Policy on Internal Control Systems."

On June 17, 2016, we formulated the Basic Policy on Corporate Governance. This policy statement defines our basic approach, structure, and management policy concerning corporate governance, with the objective of increasing corporate value through our sound business activities in adherence to compliance standards under our corporate philosophy "THE INTAGE GROUP WAY." On December 14, 2018, in light of the revision of Japan's Corporate Governance Code, we have partially revised the Basic Policy.

Since 2013 when we moved to a holding company structure, we have changed our corporate governance structure and system.

On June 17, 2016, we transitioned from being a company with a Board of Corporate Auditors to a company with an Audit & Supervisory Committee, with the objective of arranging an environment that supports appropriate risk taking on the business execution side. We have also aimed at strengthening the oversight and supervision function of the Board of Directors, accelerating decisionmaking through the delegation of authority, and raising the level of fairness, transparency, and effectiveness in business execution.

Since the transition to a company with an Audit & Supervisory Committee, we have been promoting optimal corporate governance, by adopting a performance-linked, share-based compensation plan, by implementing external evaluation concerning the evaluation of effectiveness of the Board of Directors, and by taking other measures, in accordance with the business and management environment.

They also understand the conditions of group companies, through collaboration with the Internal Audit Department, regular briefings from it, and communications with auditors of the INTAGE Group.

The Internal Audit Department, which is in charge of the Company's internal audits, consists of seven persons and conducts auditing of the Company and Group companies, from the perspective of whether the companies are fairly, appropriately, and effectively managed and execute operations, based on both shared management philosophy and policy as well as various rules. With regard to the audit process, the Department checks audit plans, execution of audits, reporting of audit results, and status of improvement, based on the Company's "Internal Audit Rules and Execution Standard."

The Audit & Supervisory Committee and the Internal Audit Department also hold regularly scheduled liaison meetings, with the aim of improving effectiveness and efficiency of audits by both. Liaison meetings confirm the audit policy and plan at the beginning of a fiscal year, and members closely collaborate by exchanging opinions on internal audit reports, during and at the end of the year. 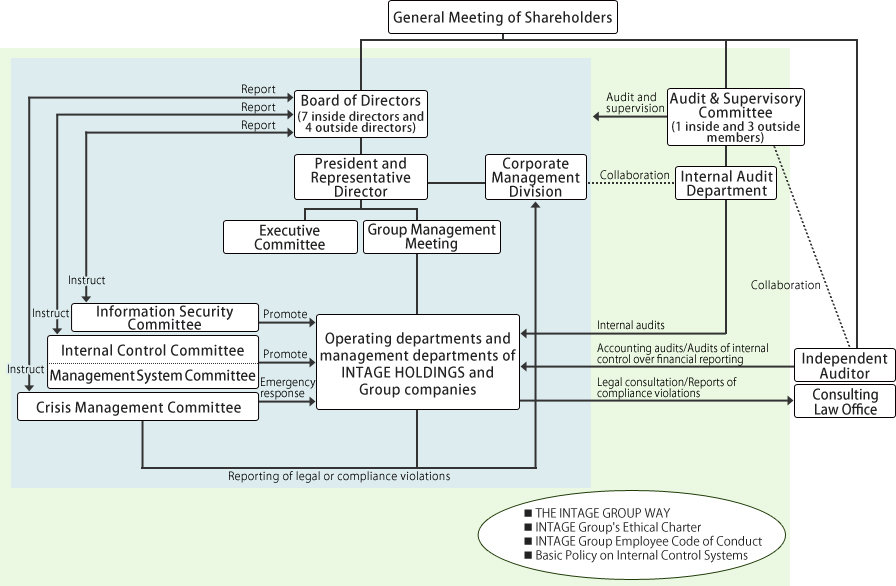 COMPOSITION OF MANAGEMENT (AS OF JULY 2020)

COMMENTS FROM AN OUTSIDE DIRECTOR

I am anticipating the INTAGE Group to further develop and contribute to society based on its understanding of consumers and customers.

This pandemic is so worrisome but I have been impressed by the INTAGE Group's smooth, consistent operation even during the change of its leadership or in the midst of social, economic turmoil, driven by the COVID-19 pandemic. In May 2020 INTAGE published a report "New Normal in life: With Corona/After Corona" which summarized medium- to longterm themes concerning consumers' attitudes and behavior in the COVID-19 crisis in the form of nine themes. Such predictions that reflect the trend of the macro social and economic environment can be useful not only to client companies but also to society in general. Then in August 2020 INTAGE Holdings announced the Declaration to Achieve the SDGs. INTAGE advocated use of consumer-oriented data and showed a vision appropriate to a new era.

The 13th Medium-Term Management Plan has made it clear that the INTAGE Group will not cling to the conventional segment definitions but will endeavor to generate group synergies in helping customers solve their business problems. INTAGE has shifted to a two-division structure that comprises of the Customer Business Drive Division and the Business Development Division, to be suitable for the new policy. I am anticipating further development of the INTAGE Group, as a corporate entity that deeply understands consumers and customers.

Each year, the Board of Directors analyzes and evaluates its effectiveness as a whole, by taking into consideration relevant matters, including the self-evaluation of each director, which is obtained by means of questionnaires and hearings, and a summary of the results is disclosed. In addition, the chairman of the Board of Directors regularly listens to opinions on the management of the Board from outside directors.

In 2020 we invited an outside consultant to help us prepare and conduct interviews and analyze the results, in order to more objectively understand points for improvement with the ultimate objective of raising effectiveness of the Board of Directors. The results were reported by the consultant at the Board meeting in September and the Board confirmed the evaluation results and its plan for a future response.

According to the evaluation results, the Board is appropriately structured and ensures diversity, and it was confirmed that the Company's managerial issues were discussed in a cooperative atmosphere with each director on an equal basis. Directors also receive training and secure sufficient opportunities to communicate with each other other than at a Board meeting. The results therefore concluded that the effectiveness is ensured and has improved for assurance of appropriate conduct in the resolution of important managerial matters and supervision in execution of operations.

Given this evaluation of effectiveness, the Company will continue to implement and consider further improvement, such as reviewing the criteria for agenda items for the Board of Directors and submission of information to directors, so that the Board can exert its effectiveness to the maximum extent. The Company will also continue to consider further improvement on how the Board's functions or actions should be for enhancing corporate value.

In the Nomination Committee, independent outside directors play a leading role in deliberation and the President participates in the Committee as a member from the Company. Candidates for a position as director are evaluated and selected with the objective of making use of outside persons' insights concerning personnel development. Candidates for nomination as director (excluding directors serving as Audit & Supervisory Committee members) are so developed after being evaluated in aspects such as managerial performance, optimal allocation of managerial resources, and business prospects and preparation of the INTAGE Group.

Candidates for directors with the assignment to serve as an Audit & Supervisory Committee member are evaluated in terms of their insights based on their current business and their performance.

In either type of compensation, specific details of benefits are determined by a separately-established committee concerning compensation, which consists of the President, directors serving as Audit & Supervisory Committee members, and outside directors, upon delegation by the Board of Directors.

The plan grants points to each director and executive officer in accordance with his or her position and the extent of achievement of the earnings target for each fiscal year. In principle, the Company's shares (the Company's one common share per one point) and an amount of money based on the accumulated value of points granted are provided via a trust to each director and executive officer at the time of his or her retirement.